I am embarrassed to say it took until late morning yesterday to remember it was 9/11, the 15th anniversary of the attacks on the World Trade Center. My excuse is that it was Sunday. Lots of people read the paper Sunday morning; I just hang with my kids. Maggie had her first lacrosse practice at Brooklyn Bridge Park so it all dawned on me as I watched her run around (promise there was some running, despite a brief respite, which is what I apparently caught on film) with the Freedom Tower in the background. A bit surreal. 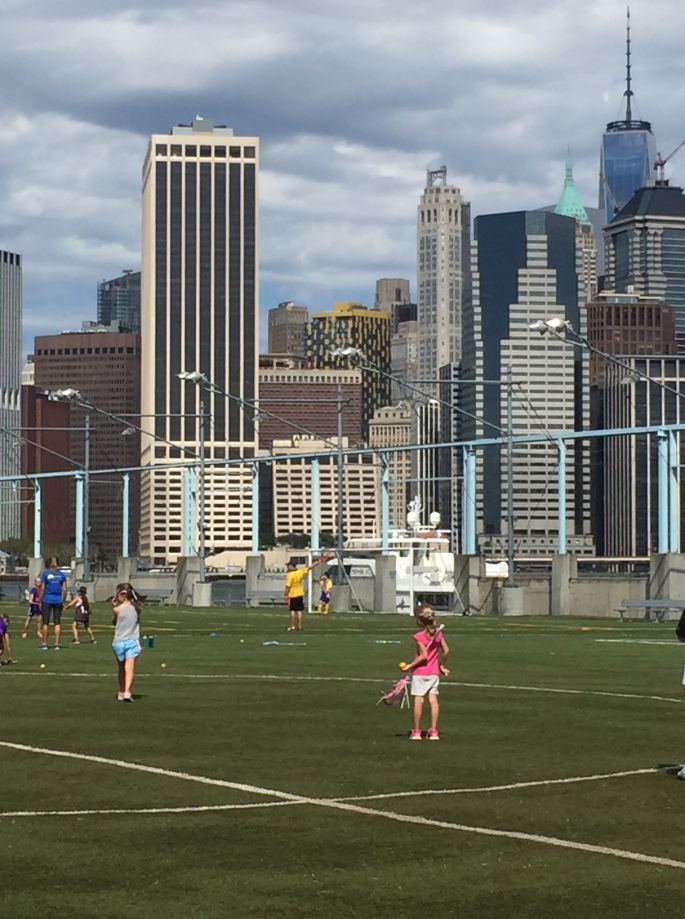 On September 11, 2001, I woke up early for a morning run. I lived in the East Village at the time and decided to make it a longer run than usual, as it was a gorgeous day. I ran over the Brooklyn Bridge. I remember thinking how beautiful lower Manhattan was on my run back to the city.

And then, a few hours later, all hell broke loose.

I worked at Bartle Bogle Hegarty at the time as an Account Supervisor. One of my accounts was eSpeed, the electronic trading platform arm of Cantor Fitzgerald. We were scheduled to launch their first-ever national advertising campaign on September 17, so we were in a mad scramble to get everything produced. But instead of finishing the production of a campaign on that gorgeous Tuesday morning, I made phone calls from Cantor Fitzgerald’s law firm’s office in the MetLife building to the families of those we believed to be survivors, trying to account for every employee we possibly could in order to determine who was still missing. Not your typical ad executive responsibilities. Nor were my efforts for the next several months.

My sisters both work in schools, one is an administrator and the other, a teacher. Those are important jobs. Advertising is not. It’s a hard job. And it’s a fun job. But it’s not an important job. Often, it creates more bad than good. But several months following 9/11, it became an important job. We never launched eSpeed’s first-ever national campaign on 9/17 as planned. In fact, all of that work died along with so many friends and loved ones on 9/11. Instead, we were tasked with creating a campaign for Cantor Fitzgerald/eSpeed to show the country that 9/11, despite taking 658 of its 960 NY-based employees, did not break that company and in fact, had make it even stronger.

The idea was simple: employee stories and tributes. The execution was really, really hard. It risked being accused of exploitation, rather than what it was: a completely genuine expression of grief and resilience from those who’d lost so much. The humans involved, however, just naturally ensured that it came off as intended. And I’ve never been so proud of a team and a body of work than I was of what we launched in May of 2002. Advertising can indeed be an important thing. I’m both as lucky and unlucky as they come to have been a part of this still-tear-inspiring feat.

Thank you to Carl Loeb, my Creative Director, for ensuring this work lives on.